by attorneymotion
in Mass Tort Law
0


Tort lawsuits filed in federal courts increased slightly in the second quarter of 2020, with most of the 173 cases related to the COVID-19 pandemic alleging negligence against cruise lines, according to a report from Lex Machina.

Lex Machina’s first “Torts Litigation Report,” released Thursday, defined a tort as a case in which “a party seeks compensation for loss or harm caused by personal injury or one’s reputational harm to an individual.” The report, which looked at filings from 2010 through Sept. 30, 2020, found case filings increased until mid-2019, after which they dropped, but they began rising again in 2020 with 4,582 cases filed in the third quarter.

“We were kind of expecting there would be more of a downturn during COVID as far as filings were concerned,” she said. “The data does not reflect the dip in filings and the consequential loss of business for law firms that I think a lot of people were expecting to happen, or maybe even thought was happening. There was a little wobble we can attribute to COVID-19, but I think people were expecting a nosedive.”

The report also looked at cases specifically related to the COVID-19 pandemic. Of the 173 tort cases that fell in this category, most were for negligence against cruise lines and nursing homes, followed by meatpacking plants and Chinese government entities. Kann said she expected more to come “rolling in” during 2021.

“I personally expect this is going to continue,” she said. “We have not seen that many tort cases that get this COVID categorization yet, but we’ve got a long way to go.” 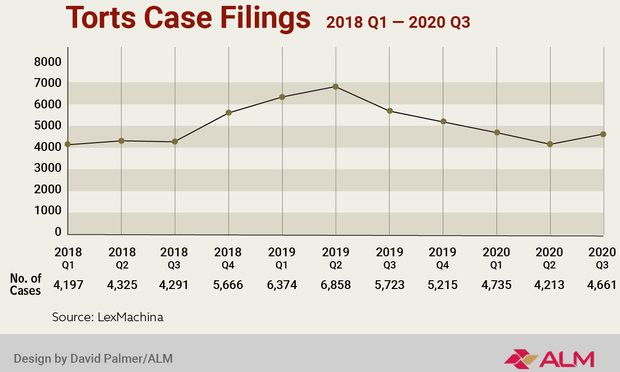 In its separate COVID-19 Impact Analyzer, released last month, Lex Machina, a Lexis Nexis company, found that 3,362 new filings through Aug. 31 made up a “first wave” of cases tied to COVID-19. Most of the COVID-19 cases—defined as those that would not have been filed had there not been a pandemic, or circumstances related to the pandemic exacerbated an existing dispute—involved insurance and contract disputes.

It also noted whether the numbers included or excluded “mass tort cases,” defined as lawsuits tied to four specific litigation matters: the Deepwater Horizon oil spill in 2010; the C-8 water contamination at DuPont’s facility in West Virginia; the Sept. 11, 2001, terrorist attacks; and environmental cases tied to a Doe Run lead smelter in Peru.

When excluding those mass tort cases, the number of filings was steadier over the past two years, with a slight uptick from 4,173 to 4,582 cases during third-quarter 2020.

Other trends highlighted in the report were:

Other editors: Federal eviction moratorium is no longer justified | Opinion