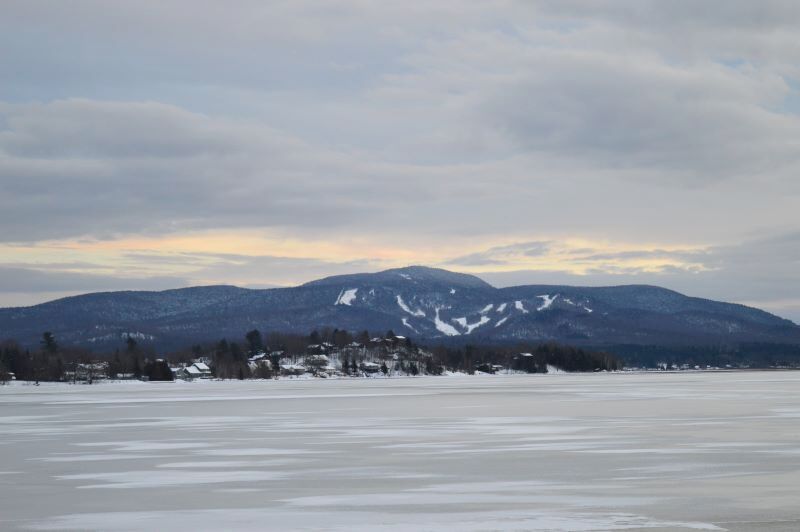 The slopes of the Big Tupper Ski Area on Mount Morris are seen from across Raquette Pond in Tupper Lake in 2018. (Photo — Aaron Cerbone, Adirondack Daily Enterprise)

An attempt by Franklin County to foreclose on the Big Tupper Ski Area property has stalled in court as property owners and lien holders attempt to get the foreclosure thrown out.

The Tupper Lake Business Group has asked the town if it could lease the property from its current owners so people can once again recreate there. Tupper Lake Town Supervisor Patti Littlefield, who also sits on the recreation development group’s Big Tupper task force, said she’d look into this but added there are no guarantees anything will come of it.

“There’s more what-ifs than anything else,” she said.

Tupper Lakers have waited for the mountain to reopen for 22 years, with the exception of a few winters, volunteers ran it. Some had hoped that if the county foreclosed on the property, the town could purchase it at a reduced price.

The town built the ski area in the 1960s and ran it for two decades until it sold the property in 1987. Local businessmen Peter Day and LeRoy Pickering kept it running until they closed it in 1999, and it fell into disrepair.

In 2003, developers Michael Foxman and Tom Lawson planned to revive the ski area and build a resort and luxury home development on it and its surrounding land, called the Adirondack Club and Resort. But after stalled state agency permits and long legal battles with environmentalists and creditors, the project ran out of momentum.

These legal battles put Foxman and Lawson into hundreds of thousands of dollars of debt in unpaid back taxes with Franklin County — the reason for the county’s attempted foreclosure. In 2019 these debts totaled $393,198. It also left hundreds of thousands of dollars unpaid to the law firms hired for these court battles — the reason for the liens, which give the firms the right to possess property in lieu of a debt.

For a few winters, volunteers revived some parts of Big Tupper, but when donated money ran out, the mountain went dark.

The town has expressed interest in purchasing the property from a potential foreclosure auction and would have first rights to buy it from the county.

“That has been squelched,” Littlefield said at a board meeting last week.

For now, at least.

Property owners and law firms who have liens on the property have filed several “service of answers” with Franklin County Court, challenging the foreclosures on four properties — including the ski area on Mount Morris and the site of a planned marina on Big Tupper Lake. A service of answer is a response to the foreclosure, and in this case the filers are seeking to have the foreclosure thrown out.

Franklin County Treasurer Fran Perry said her office is working on a response defending its foreclosure proceeding and is confident it will be upheld.

“We have, in fact, followed all of the law,” Perry said. “We basically go and disprove their point.”

The challenges were filed by a slew of property owners and law firms.

The companies Foxman and Lawson own the four properties through — Big Tupper LLC, Preserve Associates LLC and Tupper Lake Boat Club LLC — filed service of answers alleging that the county did not give them proper notice of foreclosure and that foreclosure would be an “inequitable penalty.”

Perry said the LLCs have received a tax bill every January going back to 2013 informing them they have delinquent taxes to pay, but the taxes have not been paid.

“It’s a pretty standard occurrence,” Perry said of the service of answers. “I believe it’s a delay tactic.”

She said the service of answer makes sure the county has all its “i”s dotted and “t”s crossed.

Legal firms Shanley, Sweeney, Reilly and Allen, and Whiteman Osterman and Hanna, which provided services to the property owners, also filed service of answers. So did Bleeker St. LLC, the estate of James Robert Treadwell and James Robert Treadwell, the Baxter Group, Raymond L. Struble and Brian R. McNaught, who have liens through mortgage agreements.

These service of answers allege the county did not state a cause for the action, did not commence foreclosure within the right time frame, did not disclose the amount of unpaid 2013 and 2014 property taxes, and did not show payments from other sources on those taxes.

Perry said the county will file its response with Franklin County Judge Robert Main Jr. in May.

In the meantime, Tupper Lake Business Group public relations manager Dan McClelland, who also owns and publishes the Tupper Lake Free Press newspaper, said the group hopes the town can work out a lease agreement with the property owners so it can be used for skiing, hiking, biking and snowshoeing.

He said back when the town ran the ski center, it leased the property from the Oval Wood Dish Corporation. This would be a return to that system, he said.

“Right now people are using the property anyway. They’re trespassing,” McClelland said. “We’d just like to see it in town hands so the town can pay the insurance necessary to let the public on it.”

The group’s long-term goal is still to find a public or private entity to develop and run the ski area, but until the ski lifts can be rebuilt, McClelland said he’d like people to be able to skin up and ski down the mountain.

“It seems a shame to have that kind of place in the community and not have it open to the public,” McClelland said. “We just want the town to have control of it in some fashion.”

Bill Would Give Medical Care for Firefighters’ PFAS Exposure (1)