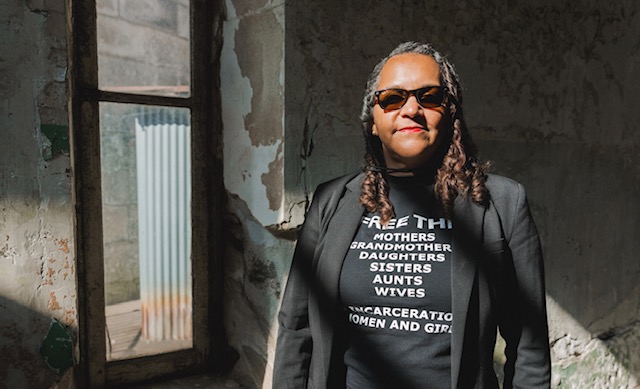 Andrea James, a former criminal defense attorney turned activist, is pushing President Joe Biden to grant clemency to 100 incarcerated women within his first 100 days in office through the #FreeHer campaign.

James is the executive director of the National Council for Incarcerated and Formerly Incarcerated Women and Girls, which launched the #FreeHer campaign seeking clemency for 100 women within Biden’s first 100 days. She said that these women should be granted clemency because they have served enough time for their convictions.

“They are a symbol of the thousands of women” who are currently incarcerated in the U.S., she said.

Here, James spoke with Law360 about the origins of the #FreeHer campaign and the importance of using clemency to correct injustices.

What gave you the idea to start the #FreeHer campaign?

Our work started in the federal prison for women in Danbury, Connecticut, where I served a two-year federal prison sentence for wire fraud in 2010. I walked into that prison crammed full of Black and brown women who the majority were serving drug conviction sentences from mandatory minimum sentences that were created under the 1994 Crime Act. And it was just shocking, even as somebody who was a criminal defense attorney and stood in courtrooms every day defending people.

We were going to fight to have our voices to be heard, and we were going to begin to organize ourselves to end the incarceration of women and girls knowing that a prison will never be the place for a woman or girl to heal and advance her life.

So that’s the seed of the #FreeHer campaign that we officially launched in January on Biden’s Inauguration Day.

Why are you seeking to specifically free these 100 women?

The categories that we selected from our women are elderly, terminally ill, survived and punished — meaning they’re survivors of interpersonal harm like domestic violence — and long-timers, women who have just been in prison for more than 10 years.

We started clemency pushes with other presidents. Under the Obama administration, we were very instrumental in pushing out lots of women who were serving life sentences in the federal system. But for clemency, they would still be there today.

So there are a lot of women that we were already in the fight for under the Obama administration, which President Biden was a part of that administration. He knew about the clemency project. We went to the White House a few times and had the opportunity to speak about women in incarceration.

These 100 women fit into one of those four categories, or some of them all of those categories, but they are a symbol of the thousands of women. There are 16,000 women in the federal prison system, and, and we have never wavered from our goal as women who have actually had the experience of living in a prison and knowing that environment and the culture of incarceration in the United States is never going to be the answer.

What would be better alternatives to putting women and girls in prison?

Most of it is really hyperlocal community-led work. We did a two-and-a-half-year listening tour around the country led by incarcerated and formerly incarcerated women and girls, and also women who are most directly affected in the community, such as wives of women, sisters of women, women who are mothers of both women and men, girls or boys, who are currently incarcerated but not formerly incarcerated. We took all that information, and then we did a whole other process of participatory research of having these same women create an infrastructure that steps outside of the system and looks internally, turns inwardly, into the neighborhoods that are most directly affected, and can figure out an infrastructure for how we can address the issues that cause other people in our neighborhoods to wind up on a prison bunk and being cycled in and out of county jails, state prisons and federal prisons.

That infrastructure that was built for hyperlocal organizing is called reimagining community. There’s several different components to that that are all people-led processes. They’re all pieces of participatory defense, participatory budgeting, transformative justice work and the direct-cash disbursements that we do. These are all things that are led by the people from within their own neighborhoods. And that is significant, because when you have had decades of economic disruption and family disruption because of the use of prisons and punishing people through carceral fees and fines that extract resources from households, that has been a constant response to people who are struggling with poverty and a lack of educational and training opportunities and lack of jobs. Once you have been convicted of something or have gone to prison, when that’s the case, you have to figure out something different.

Has any progress been made on freeing these 100 women?

We’re just stuck, really. We have done everything we can do. We have been very forward and outspoken on appeal to President Biden. We have spoken to the Biden clemency team. We have, even prior to President Biden becoming President Biden, reached out to his transition team. Many of those advisers to him were people that we worked with under President Obama’s administration. They know who we are, but we haven’t received one response.

On a regular basis, I’m sending [them] information and articles and op-eds about this issue. We’ve been on mainstream media. We’ve been everywhere, and we stood on the line for President Biden, voted for him, and believed him when he said that racial justice is a priority of his. What we’re saying is clemency is racial justice. We must use [clemency], not as a gift, not as something that is left at the end of whatever your final turn is, but right now, coming out the gate to demonstrate that you do understand that there have been significant harm caused to Black, brown and poor communities in this country as a result of some missteps in criminal legal policy. And that one way that we can correct those missteps is to use your clemency power and to use it unapologetically to correct some of these missteps.

But we have not heard one response from the Biden administration. And we’re asking for something. Give us something. Release somebody. Surely [Biden] must believe that Michelle West deserves a second chance. She’s given 30 years in the federal prison system [for a drug conviction]. She’s a leader in the prison. She is a mother to women. She leads all kinds of programs and projects and teaches classes. These are the women we’re talking about, and others who are sick and terminally ill. Let them come out. There’s no need for this. And it doesn’t make you look any other way than that you have a clear understanding about what second second chances really mean as the Biden administration begins to talk about Second Chance Month.

Second Chance Month should not be just about prison reform and about after you serve your sentence. You need to let people come home who have served significant years, women whose children have grown up without them who are adults now like Miquelle West, the daughter of Michelle West. So grew up her entire life without her mother. It’s caused a lot of trauma, a lot of harm, and it’s continuing with other children who right now their moms are going on their 10th, 11th or 15th year in a federal prison. It’s unnecessary and it’s wrong, and clemency should be used as a tool to correct that.

Are you hopeful that you will be able to get all of these women, or even some of them, freed within Biden’s first 100 days?

We walk on hope. Danielle Metz would still be on a prison bunk without people like us and a whole lot of other people who got on board with her campaign to get this young woman out after 23 years and went to prison at 26. There are women just like Danielle that we’re fighting for clemency for who are still on that federal prison bunk. And so we have to have hope. The women that make up the national council, we all know what it’s like to be on that prison bunk with no hope. So we are their hope. We are always going to have hope.

Even after 100 days, we’re going to continue this fight. We have to do this because it’s morally right. We’re not trying to create clemency. It exists. It’s a power that has been bestowed on the president of the United States, and a president who also has a son who, clearly now we are all coming to understand because of his own storytelling, struggled, and was only because of all of his privilege isn’t sitting on a prison bunk. These women are no different, except for they were poor and Black or poor and white without the privilege. Their addiction, in many cases, landed them on a prison bunk, where they’re still sitting.

All Access is a series of discussions with leaders in the access to justice field. Questions and answers have been edited for length and clarity.

Have a story idea for Access to Justice? Reach us at accesstojustice@law360.com.

Oil And Gas Bankruptcies Jump Despite Rise In Crude Prices