Giving undocumented immigrants access to driver’s licenses has transportation benefits for everyone.

Despite the need for access to a car in most US towns and cities, only sixteen states effectively allow undocumented immigrants to obtain a driver’s license. In new research, Jesus M. Barajas finds that when undocumented immigrants have access to driver’s licenses, there is no change in the number of miles they drive or trips they drive alone, but it does increase the number of carpool trips taken.

Access to a car is nearly essential for day-to-day life in the United States. Four out of every five trips are made by car, and only in the largest cities do other transportation modes like public transit, walking, or bicycling compete with driving because of the sprawling nature of development in most other places. Getting a driver’s license opens up new opportunities for people, not only because drivers can get to places more easily, but also because many jobs require a license as a condition of employment.

But not everyone is eligible for a license; some for reasons of age or disability, some as a consequence of traffic violations, and some—like undocumented immigrants, who make up about a quarter of the nearly 45 million immigrants in the US—because they are unable to prove lawful residency. While most states require applicants to submit documentation proving lawful presence in the United States, such as a permanent residency card and a Social Security Number, sixteen states and the District of Columbia permit applicants to submit alternate documentation, effectively allowing undocumented immigrants to obtain driver’s licenses.

Does allowing undocumented immigrants mean more cars on the road?

Issuing driver’s licenses to undocumented immigrants has been a politically contentious matter, but evidence suggests there are net safety benefits in the states that issue them. For example, the share of drivers who are insured increases, average car insurance costs go down, and the number of hit-and-run crashes decreases. Yet researchers had not yet determined whether permissive licensing—a term I use to describe laws that allow undocumented immigrants to obtain driver’s licenses—added more cars to the road. To determine what effects permissive licensing had on how much and how often immigrants drove, and whether they shifted trips away from other modes of transportation, I used data from two waves of the US National Household Travel Survey (NHTS) conducted in 2009 and 2017, a nationally representative survey of travel behavior.

How does the day-to-day travel of immigrants compare to that of people born in the US? Immigrants, on the whole, are less likely to drive alone and more likely to take alternative modes of transportation compared to their US-born counterparts (Figure 1), a finding consistent with past research on immigrant travel behavior. In 2017, immigrants took 78 percent of their trips by car, whether by driving alone or carpooling, while US-born residents made 83 percent of trips by car. In permissive law states, the differences in driving between the two groups were much smaller than in the other states, differing by only a percentage point. The differences were also much smaller than they were in 2009, reflecting broader societal shifts in the ways people get around.

Figure 1 – Changes in share of travel by mode, by immigrant status and driver’s license law type 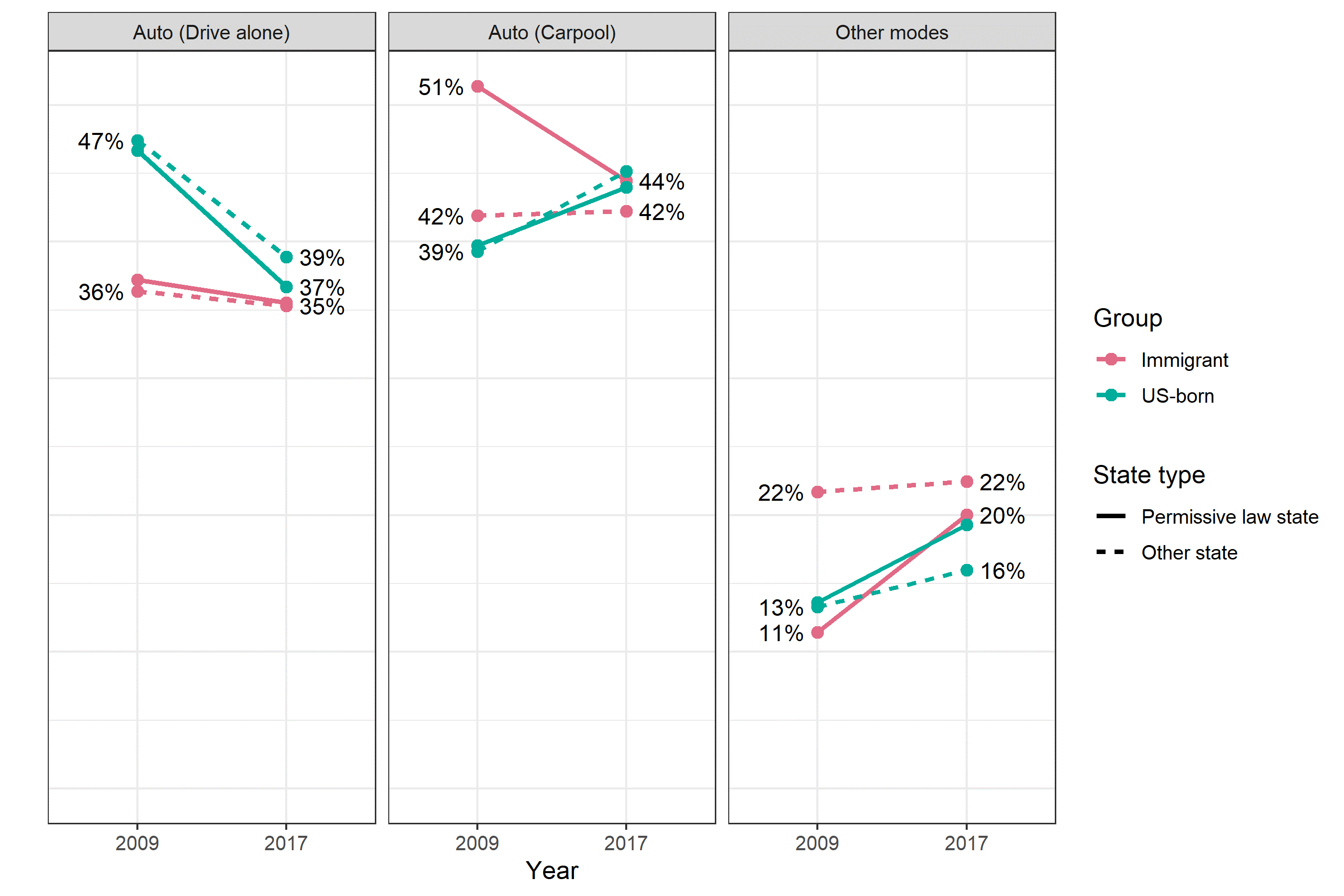 Permissive license laws caused small shifts in travel patterns. I measured three key indicators of overall travel: the total distance each person traveled by car per day, known as vehicle miles traveled (VMT); the number of trips made by car, whether by driving alone or by carpooling; and the share of trips made by driving alone, carpooling, public transit, and walking or cycling. Some, but not all, indicators were significantly different between permissive law states, after controlling for many of the factors associated with travel behavior, such as urban form, gas prices, socioeconomic factors, physical limitations, and time since immigration, in addition to the overall trends in travel caused by macroeconomic and other structural factors. 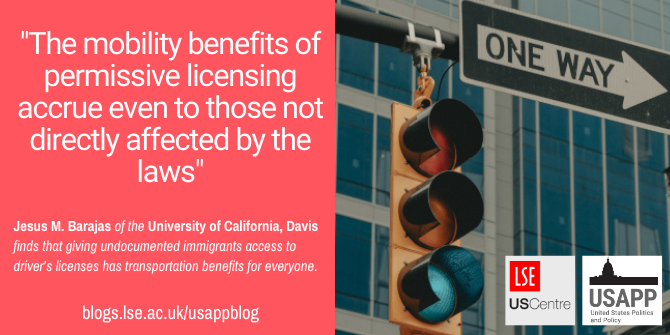 Photo by Clay Banks on Unsplash

Permissive licensing did not lead to more miles being driven by immigrants (Figure 2). On average, immigrant households took their cars an average of 55 miles per day in 2009 and 53 miles per day in 2017. This small decline in daily distance traveled was consistent across permissive law states and other states. One reason permissive licensing did not contribute to more vehicle miles travelled (VMT) is because undocumented immigrants may have already been driving, regardless of whether they had a license, as other researchers have speculated. Another is that people without licenses may have been getting more rides as a member of a carpool, which is part of the calculation of VMT. 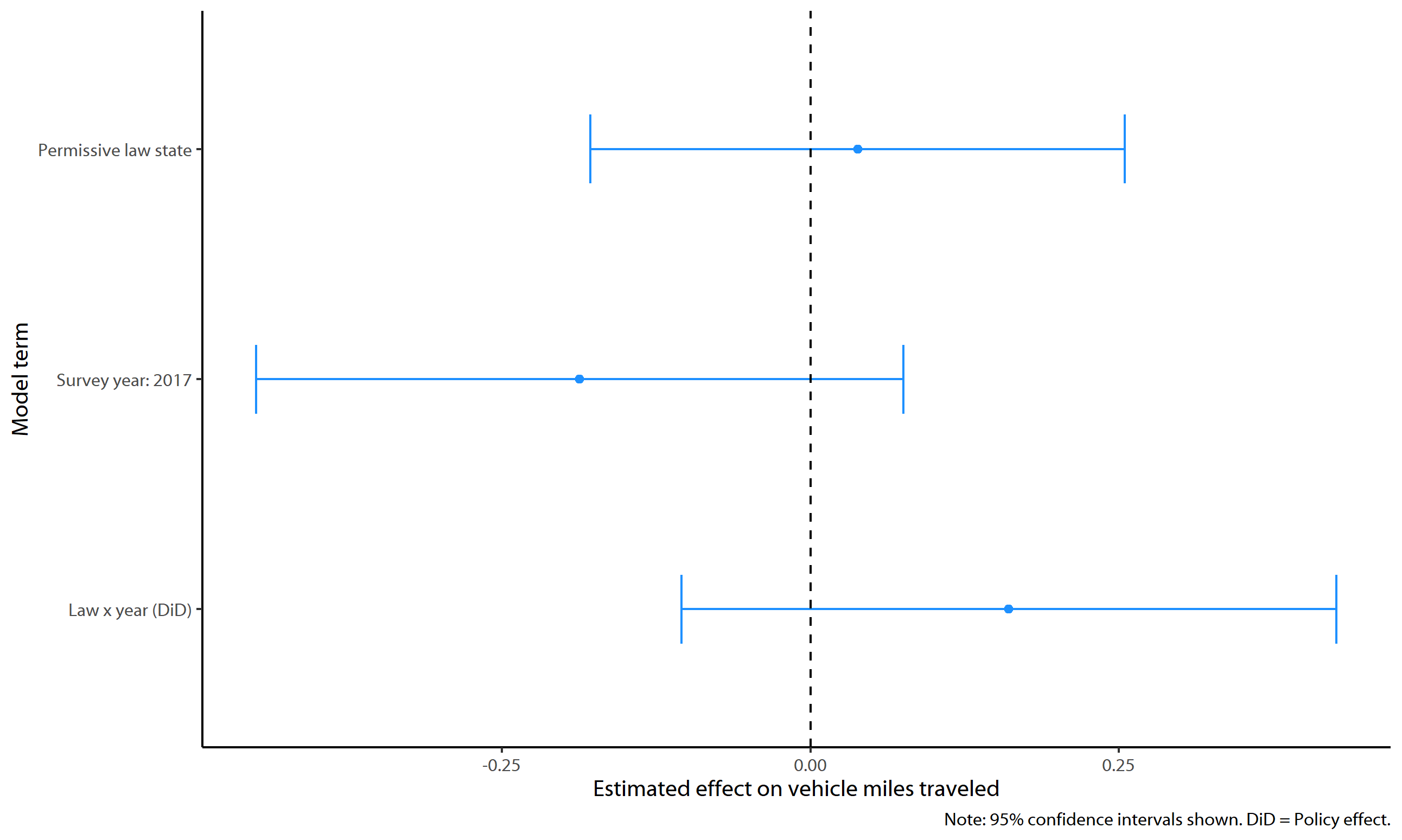 These patterns were confirmed when examining the types of car trips taken more closely (Figure 3). Permissive licensing did not have an effect on the number of car trips for which immigrants drove alone, but they did increase the amount of carpooling. Drivers gave rides to others about 13 percent more often, while people got rides from others about 6 percent more often. Although these shifts in travel don’t seem large at the individual level, in aggregate they resulted in an additional 85 million annual carpooling trips. Many of these new carpooling trips would previously have been taken on public transit, as transit use decreased among immigrants in permissive law states. Even still, the travel patterns suggest that permissive licensing laws provide opportunities for more people to get around and fulfill their daily needs while not making large shifts to less sustainable travel via driving alone.

Figure 3 – Estimated effects of permissive licensing on driving and carpooling 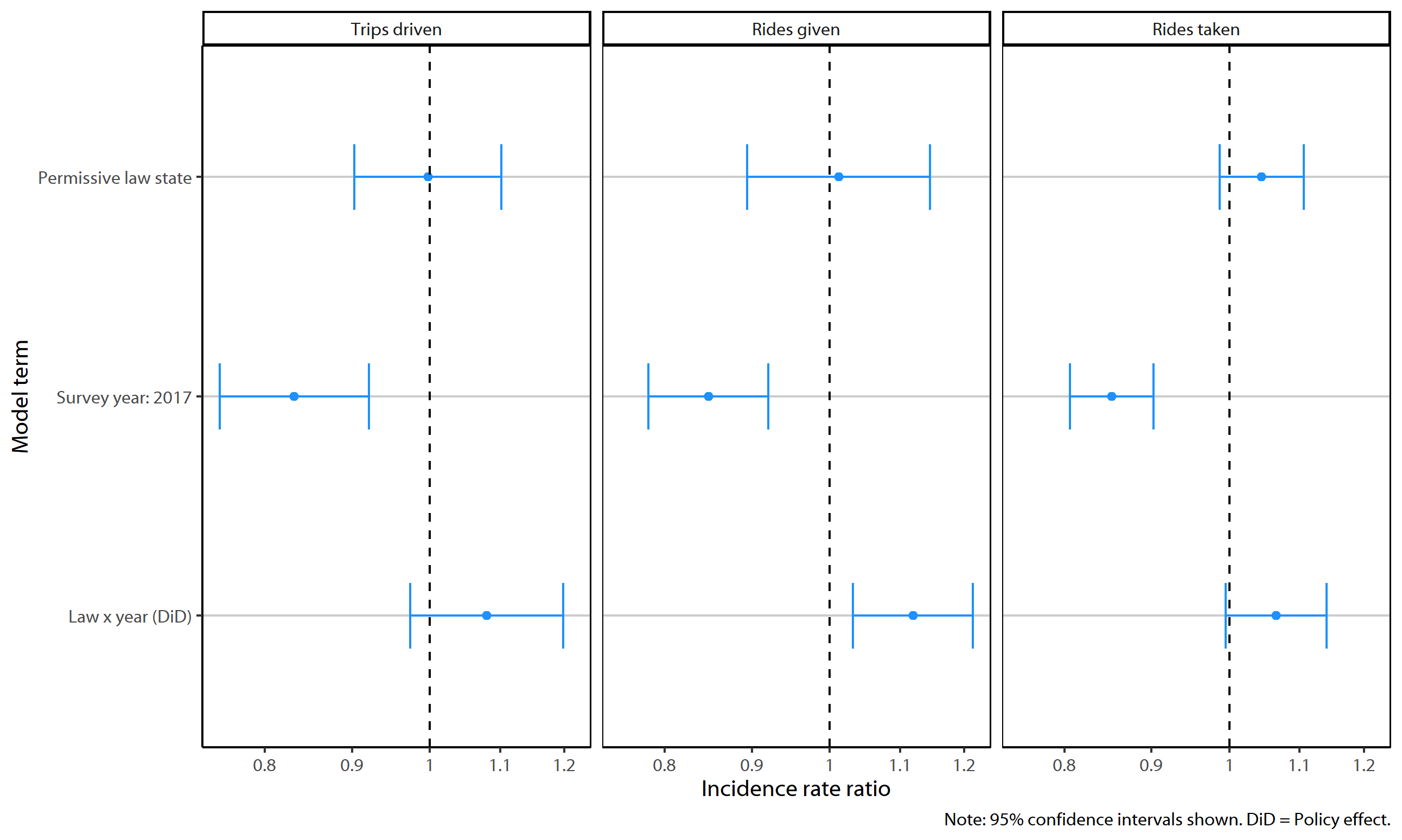 Because the US National Household Travel Survey only collects data on whether a respondent was born in the US, and not on documentation status, we can’t measure the effects of permissive laws for people immediately affected by them. Thus, these findings should be considered a low estimate of the effects for undocumented immigrants. They indicate that the mobility benefits of permissive licensing accrue even to those not directly affected by the laws. Giving undocumented immigrants the ability to get driver’s licenses improves their access to opportunities while also creating more equitable transportation conditions.

Note:  This article gives the views of the author, and not the position of USAPP – American Politics and Policy, nor the London School of Economics.